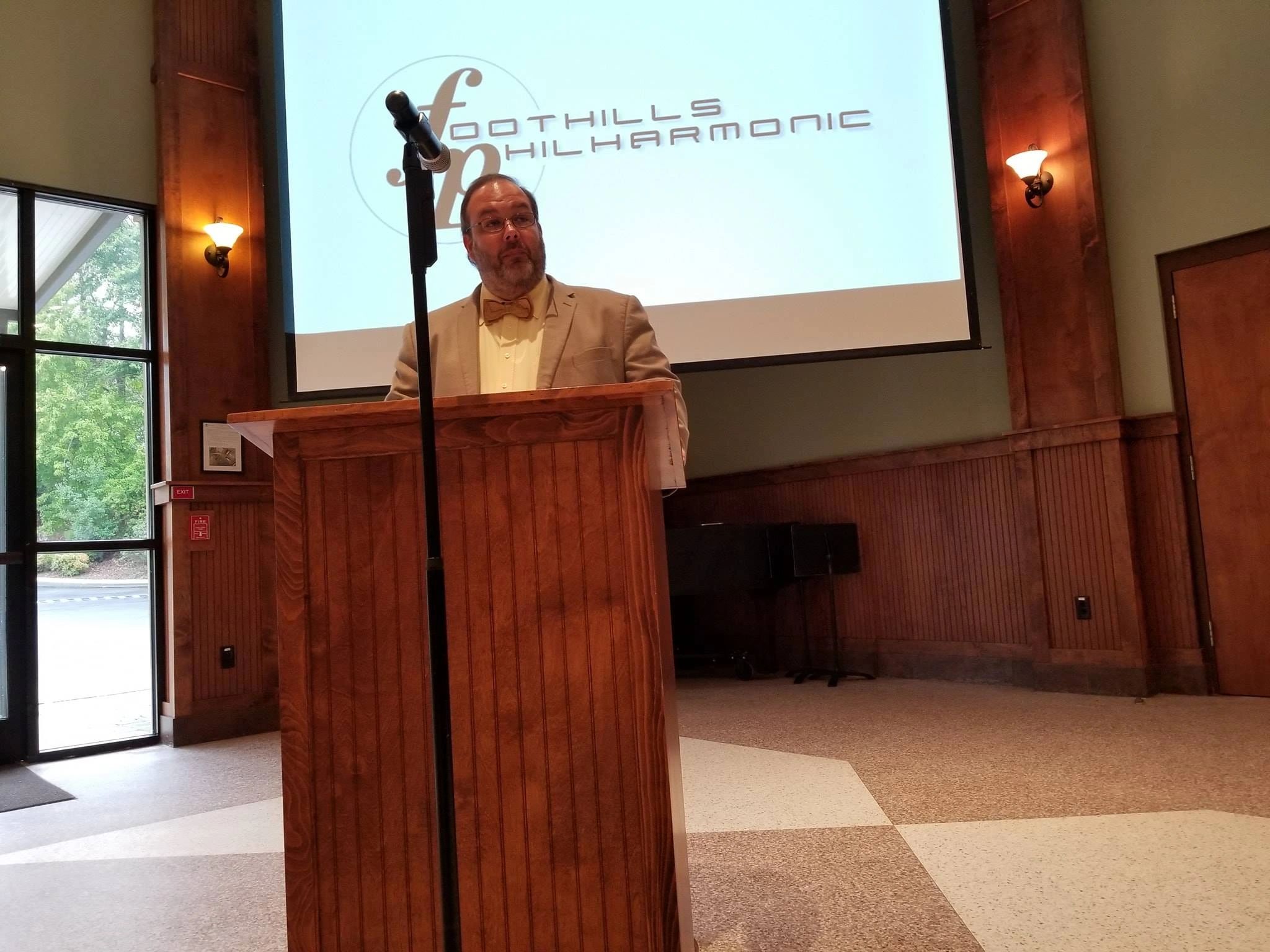 The Greenville Community Chamber Orchestra gave its first concert on November 19, 2000, featuring over fifty musicians under the direction of Dr. Victor Vallo, Jr. Perhaps appropriately for the inaugural concert of a new member of Greenville's musical community, the program consisted of "An Afternoon of Overtures" and included works by Johann Strauss, Wolfgang Amadeus Mozart, Jacques Offenbach, Franz von Suppé, and, of course, Gioacchino Rossini. The orchestra's name would be changed to Foothills Philharmonic during the second season at the behest of a similarly-named organization who felt it was too close an echo of their own.

The Greenville Community Symphony Orchestra, soon to be renamed Foothills Philharmonic, began its second season with a new music director, Dr. Gary Robinson, whose first concert took place on 11 November 2001 with a program that featured an overture by Gluck and Beethoven's First Symphony. Also on the program were two short works featuring the cellist Robert O'Brien, the first of a long and distinguished line of soloists, many professional musicians from the Upstate region, appearing with the orchestra during Dr. Robinson's nine-year tenure. The orchestra would grow both in size and artistic accomplishment under his guidance, attracting larger audiences until it outgrew the auditorium at Greenville Technical College and began to play some concerts at the Peace Center and other locations.

...what Foothills, the Nutcracker, and the Peace Center have in common?

Are your customers raving about you on social media? Share their great stories to help turn potential customers into loyal ones.Foothills Philharmonic was the original "pit orchestra" for the Peace Center performances of Carolina Ballet Theatre's annual Nutcracker. Thirty members of the orchestra under the direction of Gary Robinson accompanied the first performances on November 29-30, 2003. Foothills Philharmonic participated in the annual performances each year until budget cuts during the Great Recession of 2008 forced an end to the collaboration. Not to be left out in the cold during this festive season, Foothills Philharmonic under Kory Vrieze participated in Tree-Lighting ceremonies for the city of Greer until inaugurating its annual Christmas Pops Concert in December of 2014.

Foothill Philharmonic's first chamber concert took place during its fifth season, on January 8, 2005. It set the tone for the next few seasons, including a trio sonata by C.P.E. Bach, a divertimento for string orchestra by Mozart, brass quintet movements by Speer and Ewald, and a suite for thirteen wind instruments by Richard Strauss. The mix of smaller and larger solo ensembles and smaller orchestral works continued to be typical of the chamber concerts, which were scheduled once or twice a season. Most ensembles in the early years were put together for the occasion. These concerts have continued to flourish under Kory Vrieze. In recent years, ensembles established within the orchestra, including a string quartet, a wind quintet and a brass quintet, have appeared beside ad-hoc ensembles and smaller orchestral groupings. Now, during our twentieth anniversary season, this part of Foothills Philharmonic's mission is growing with the introduction of a chamber music series of four concerts in addition to our traditional chamber concert!

A new era for Foothills Philharmonic began on March 19, 2011, when guest conductor Kory Vrieze took the podium in a program including works by Rossini, Prokofiev, Copland, and Andrew Lloyd Webber. Maestro Vrieze was chosen to become the permanent music director beginning with the 2011-2012 season, and the rest, as they say, is history! His tenure with the orchestra, now in its ninth season, has seen Foothills Philharmonic return to its roots of giving free concerts, the introduction of dedicated Christmas and Pops concerts, a new scholarship for talented young musicians, and the establishment of ever-closer relationships with the broader community. His concerts have often featured challenging works from the orchestral repertory that have helped the orchestra grow artistically.